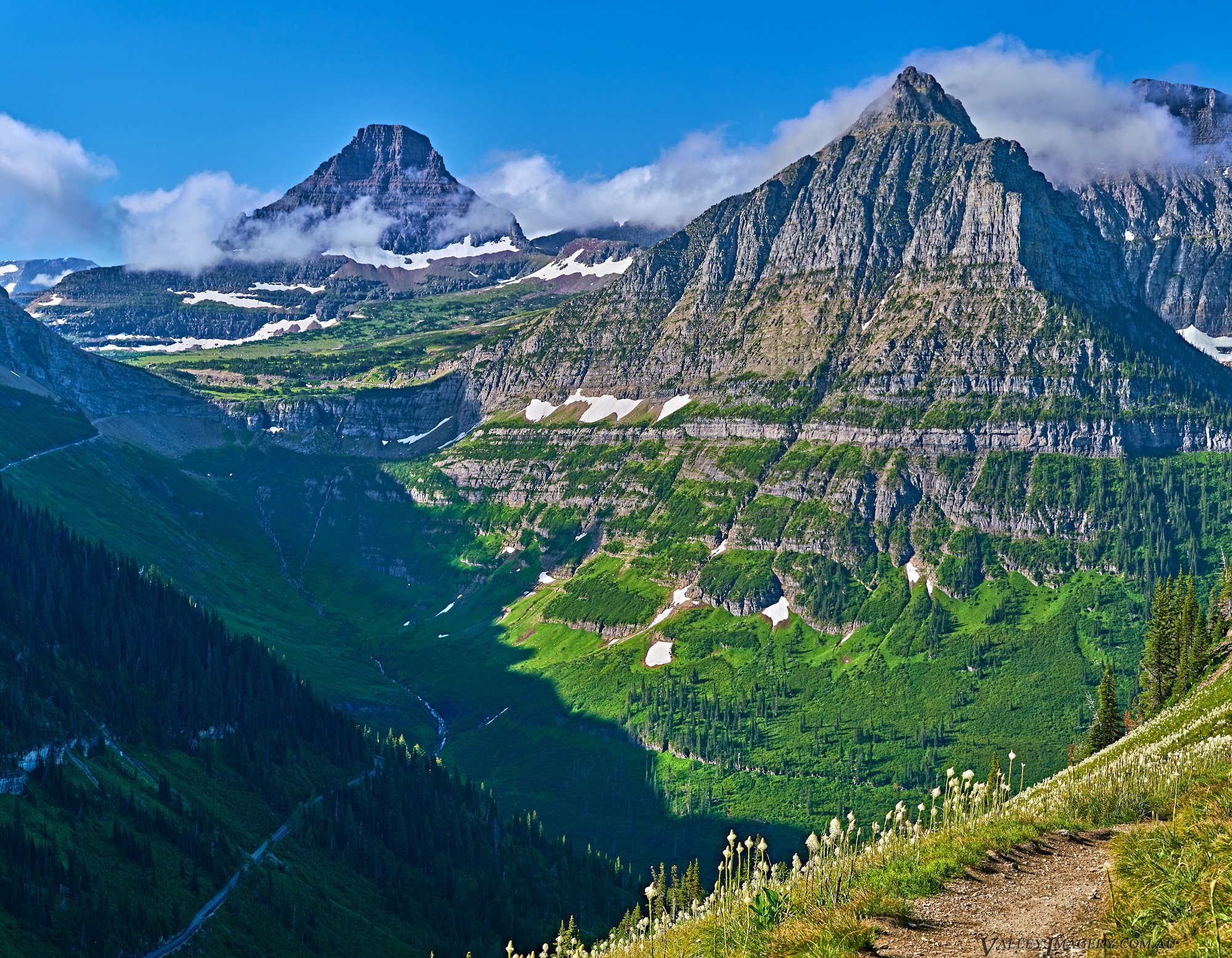 Situated in the very North of Montana USA, Glacier National Park is often called the Crown of the Continent. After a visit, it's easy to understand why. The Glacial carved environment has created tall mountains, crystal clear water and left behind a beautiful but rugged landscape. Although the park has a paved road network, it's limited by the steep mountainous terrain it's a real tribute to America that this place is even available as a public park. The effort to clear snow from the Going to the Sun rd annually is a massive effort, I for one are thankful for the effort. The privilege to visit the park is an experience not lost on any landscape photographer.

The park is large, at 1,583-sq.-mi its not something you could hope to see in a week.  The glacier-carved landscape runs all the way to the Canadian border.  There is access to activities including hiking, backpacking, cycling, kayaking and camping. Diverse wildlife ranges from Marmots and  Mountain goats to Grizzly bears. As is normal for a national park, wildlife have the right of way, grizzly bear activity routinely closes trails and can modify your plans very quickly.

We arrived in the early afternoon after driving down from Canada and a brief visit to Waterton Lakes National Park, the Prince of Wales Hotel was a great place for lunch. 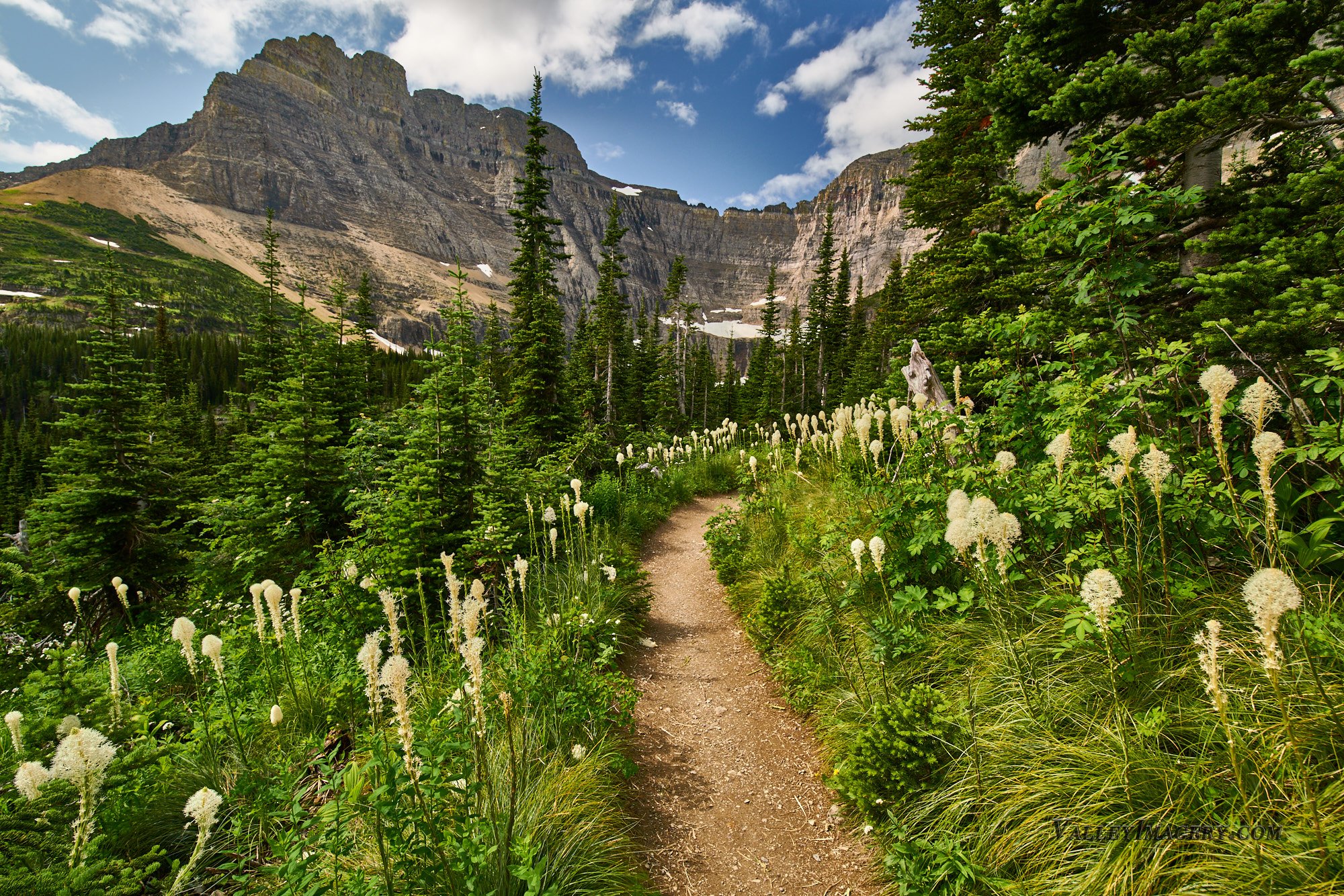 Up early as usual. I had a well thought out plan to catch the sunrise from the Many Glacier area and then hike to Glacier Lake. We left our ParkCabinCo  cabin before dawn and carefully drove the 30 min to Swiftcurrent Lake. When we arrived the clouds had settled in and my opportunity for an iconic sunrise image was dashed.

Unpurturbed we headed to the the trailhead for the hike to iceberg lake. Its a popular 9.3 mile out and back hike, the initial part of the trek is quite steep however the majority of the hike is moderate to light.

As it was our first time hiking in Grizzly country we were apprehensive about being first on the trail. It didn't take long for other cars to join us in the small carpark, so we waited for a few people to start, clipped our bearspray on and then headed out. The start of this trail is a real heart starter, switchbacks, stairs and steep paths for at least the first 15 minutes, after this things become much more sedate.

The weather was threatening light rain, and the early parts of the hike were overcast and cool, but as we progressed the conditions slowly improved. The clouds became patchy and the drizzle left us, the sky was still mostly grey and overcast but I had plenty of optimism for a good afternoon.

We had a few short stops along the way with our first real break being at Ptarmagin falls, This was our first indication of how pure the water was, its completely clear (and cold) and deceptively deep. Here I took a few shots of the falls and grabbed a light snack before we headed on our way. Whilst we stopped the number of people on the trail became noticeable, it certainly wasn't busy but we were not far from other hikers anymore. 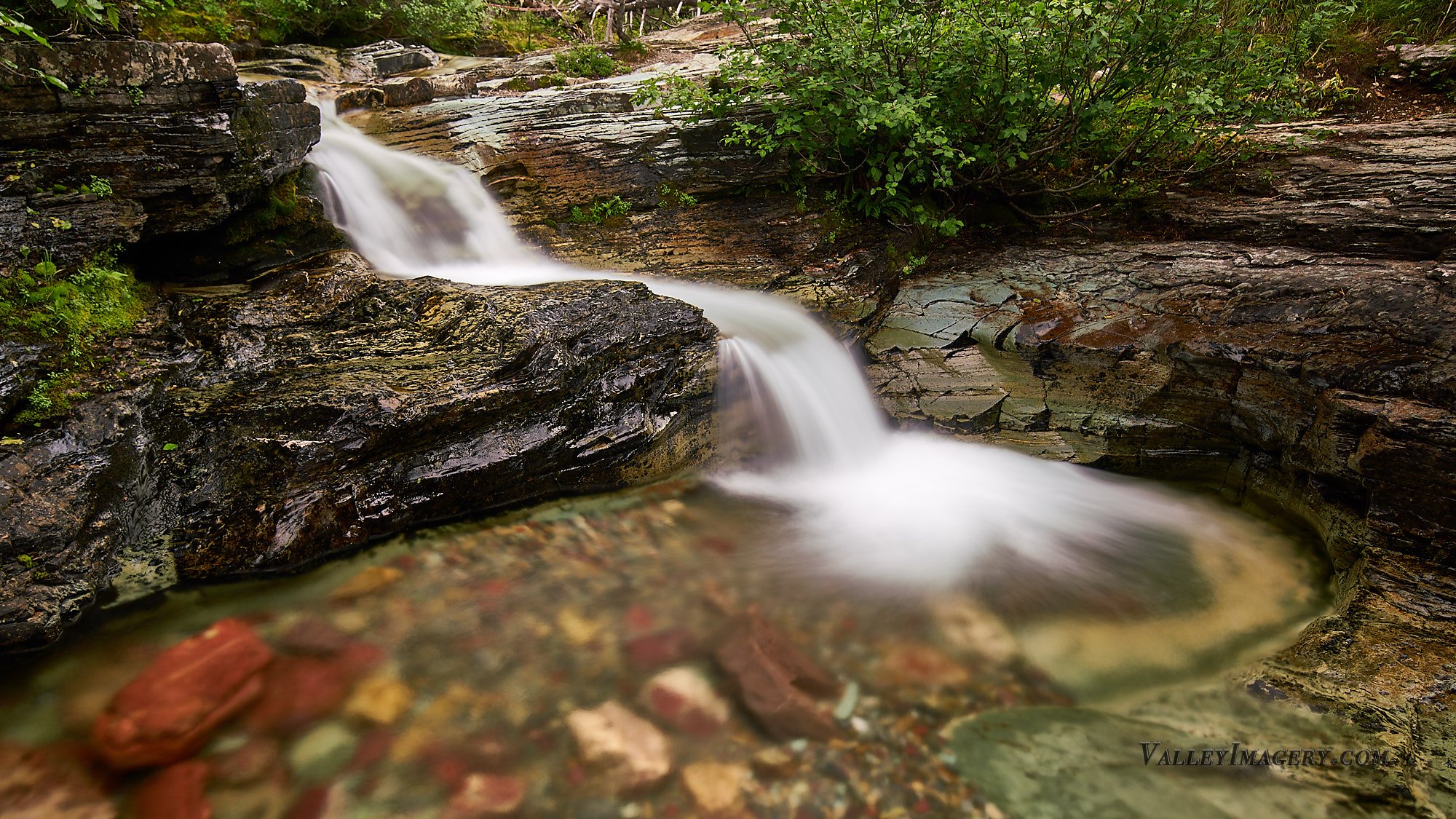 After Ptarmagan falls we walked along well trodden paths lined with Beargrass. the lake was clearly getting closer but it remained  almost elusive and  hidden. The track passed along steep ridges and we could now see across the valley, there were waterfalls and the green countryside was beautiful. As we came closer to the lake, the pathway crossed the stream that is fed by the meltwater, there are some low pedestrian bridges here and some very pretty scenes.

About an hour after leaving Ptarmagan falls we arrived at a small hill near the lake, as you begin the decent the lake becomes visible and more of the destination comes into view. It doesn't become fully visible until you get to the bank though, once you are here the beauty of the crystal clear water filled with icebergs and surrounded by mountains becomes apparent.

When we visited in Jun the lake had numerous floating blocks of ice, these had obviously broken away from the small glacier that occupied the base of the mountain, there were many shapes and sizes and a they were very slowly drifting, cracking and melting into the lake.

Upon arriving we found a large rock to rest on and ate a small lunch, After this I explored the shoreline and took a number of images to remember the scene.

We stayed for about 40 minutes, the weather was slowly improving and I really wanter to capture the entire scene, Eventually the clouds cleared enough for the blue sky to show. I found a nice central spot and shot the large 180 degree panorama below. After this we headed back down the path to take all the scenery in again.

The walk back was more spectacular, the clouds cleared away and the colour of the landscape was revealed, Despite the lake being the goal the walk back was just as rewarding.  We were not in any rush and I stopped to capture the scenery plenty of times. The trail was much busier and we suspect the area around the lake was now collecting a reasonable crowd.

We didn't spot any bears on this hike but there certainly around, some hikers we passed had spotted some along the trail. We cautiously approached every corner but they remained elusive and out of sight.

After 17 kilometers of hiking we arrived back at the car, it was early afternoon and we were able to spend some time in the many Glacier area. We purchased a few well earned treats and collected a few souvenirs. On the drive out we were caught in a Bear Jam with a large brown bear eating berries just near the road.

As we exited the Many Glacier area of the park we saw the long line of cars waiting to get in. Glacier National park is a very popular place and the steep terrain has restricted development. It was apparent that our choice of accommodation was justified. From our little cabin we had access to the two most popular entrances 20 minutes from the door. This made things easier in the following few days as getting to our planned locations early was vital to having a great experience.

Day one at Glacier had been rewarding but it was a warmup for the activities planned the following day. We went back to the cabin, and relaxed and recovered for the whole afternoon.

To continue reading about Glacier National Park, click onto the link below to see what the next day had in store.

It turns out that this little hike was a quiet warmup.