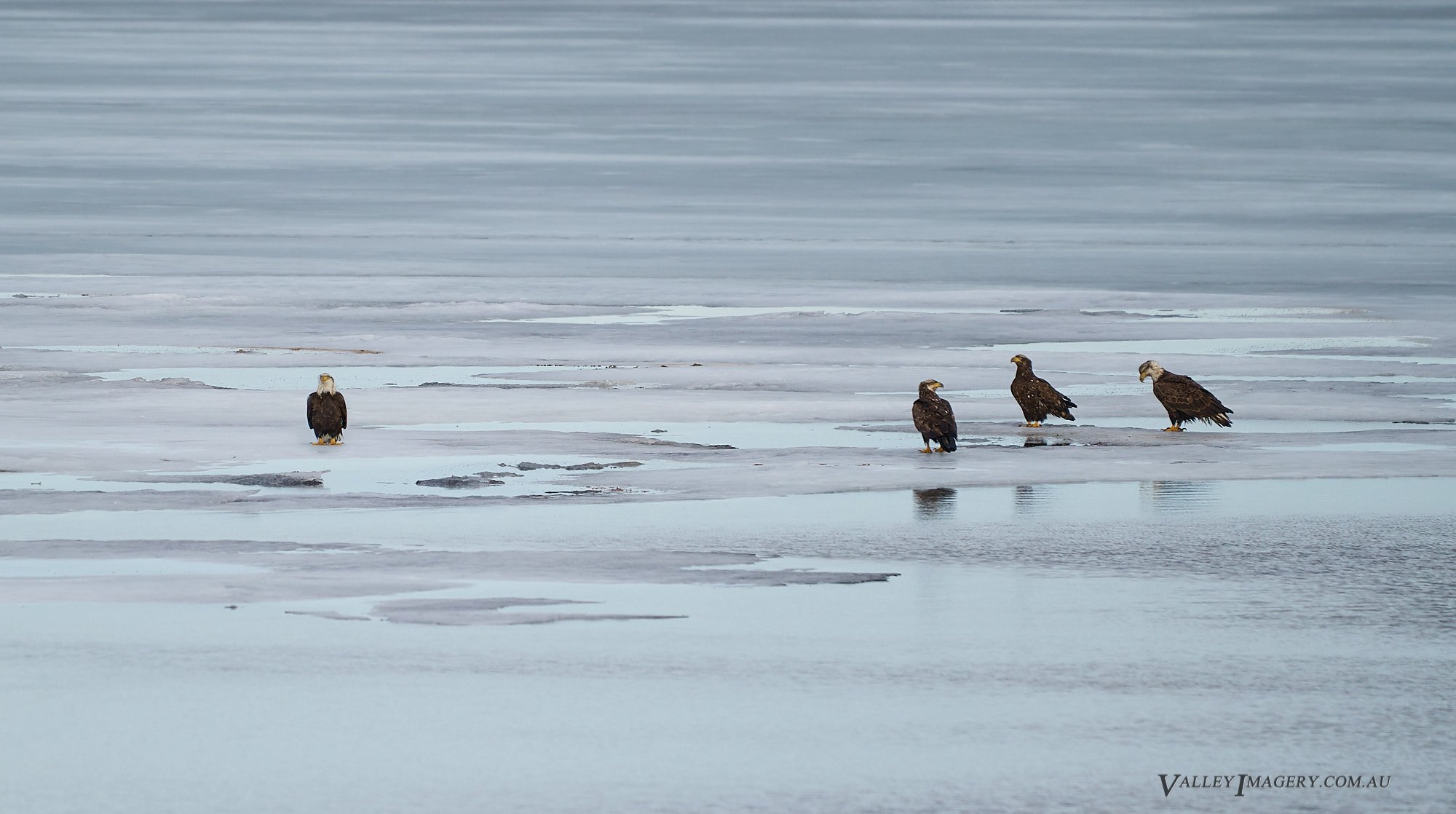 Day 7. From Fogo to Gros Morne

Today we travelled from east to west, acrid the island to Gros Morne National Park. The large park is a UNESCO world heritage site located on the west coast of Newfoundland and is named after Newfoundland's second-highest mountain peak.

We stayed in a large home in Rocky Harbour, from here we could access many of the area's of the park. From here the scale of the park becomes apparent, at nearly 2000 Square km we weren't going to see it all. After checking in at our accommodation, we took a drive down to Norris point and then went to Lobster Cove lighthouse and walked down onto the beach. As it was low tide we were able to explore the coastline and even walked onto some of the large pieces of pack ice.

After being out in the cold for a while we headed back to Rocky Harbour to plan out the next day of adventure. While we were relaxing the sunset glow out over the harbour intensified, Having an elevated view was a bonus, and I captured a stunning sunset across the ice-filled bay. 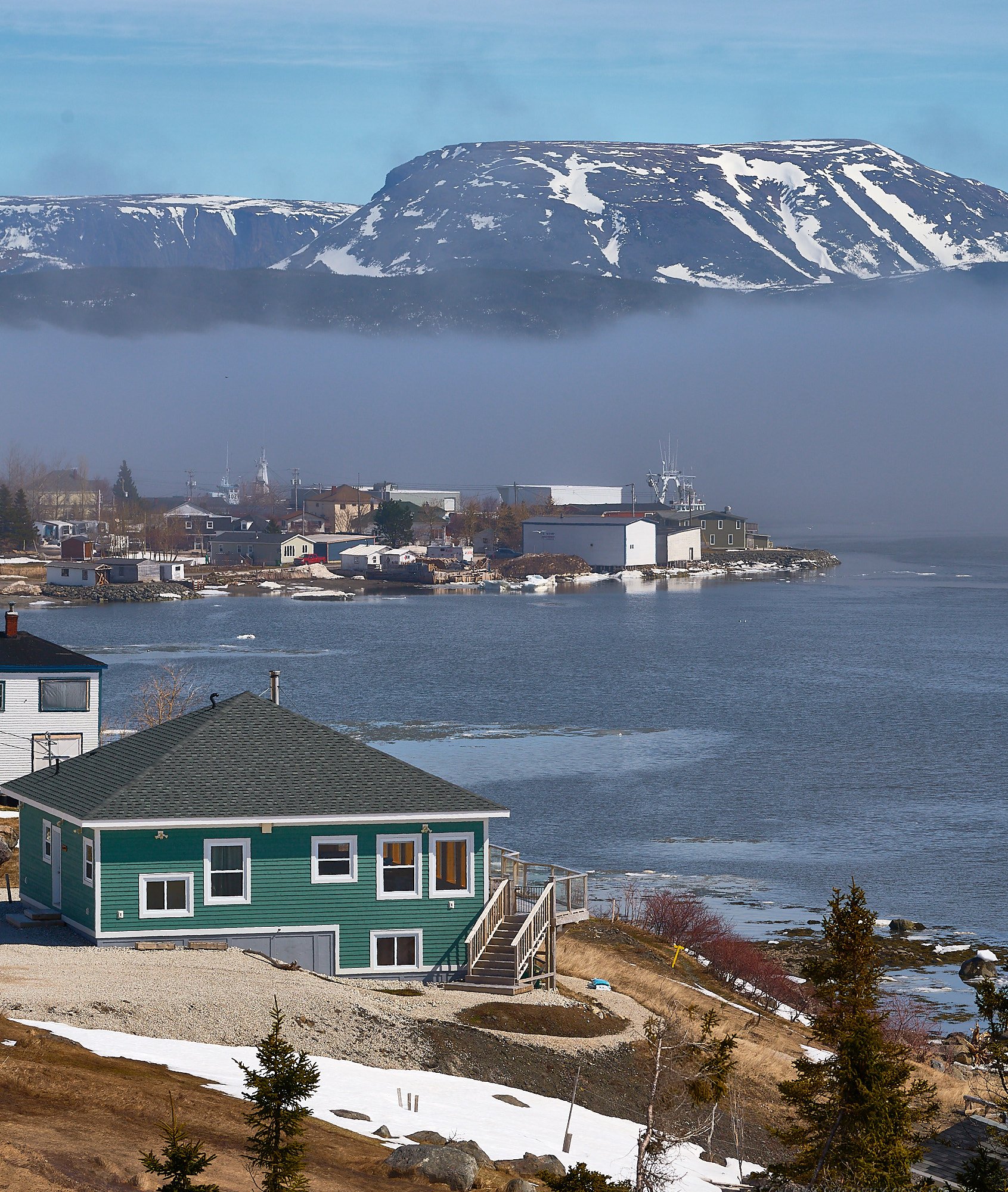 I woke before dawn (again) as I planned to capture a dawn view across the bay from Norris point. It was only a 10min drive from Rocky Harbor to the start of the little hike I had planned. This is where the fun started, to get a better view we needed to walk about 200 meters to a small lookout tower. The tricky part came when we realized the trail was covered in up to two feet of ice-covered snow. We gingerly walked between pine trees slipping and dropping through the ice and snow all while hoping the laughter was scaring away any large wildlife.

We finally reached the destination and watched the scene develop in front of us, the fog was continually changing, and the golden light was clear but disappearing fast. After capturing a few images and watching the cloud roll in, we gingerly retraced our steps back to the car. From here we headed back to Rocky Harbour for a well-earned coffee. We then prepared to head to Trout River to continue our day of exploration.

The drive to trout River took us back along parts of the road we had travelled the day prior, after a short while driving back along the road we reached the turnoff to Trout River. The mountains and frozen lakes made for a magical scene we twisted and turned for over an hour taking short stops along the way. We eventually found our way to the sharp turn just before Bonne Bay and the journey really started.

Bonne Bay rd rises steeply up into a broad valley, there are high mountains and meltwater creeks all along this stunning expanse. We soon found ourselves near a small bridge with ice-covered ground sliced by meltwater from a nearby mountain. It was a surreal scene almost unnatural in relation to the area below us and the beauty in this area will stay with me.

We eventually found our way to Trout river and attempted to continue into the park proper. Here we faced an insurmountable obstacle of ice. The road was blocked by a large pile of ice just out to the township and we were forced to abandon our plans for the day. This was not unexpected, we were visiting in early spring and expected some area's to be inaccessible. Unperturbed we walked along the icy road for a few min where we found a small car park to look over the icy wonderland and mountains around the large glacial lake. After this we jumped back into the car, and slowly headed back to the hotel. We arrived around 4.00pm had a great home cooked meal and rested up for the following day's drive to the very north of the island. 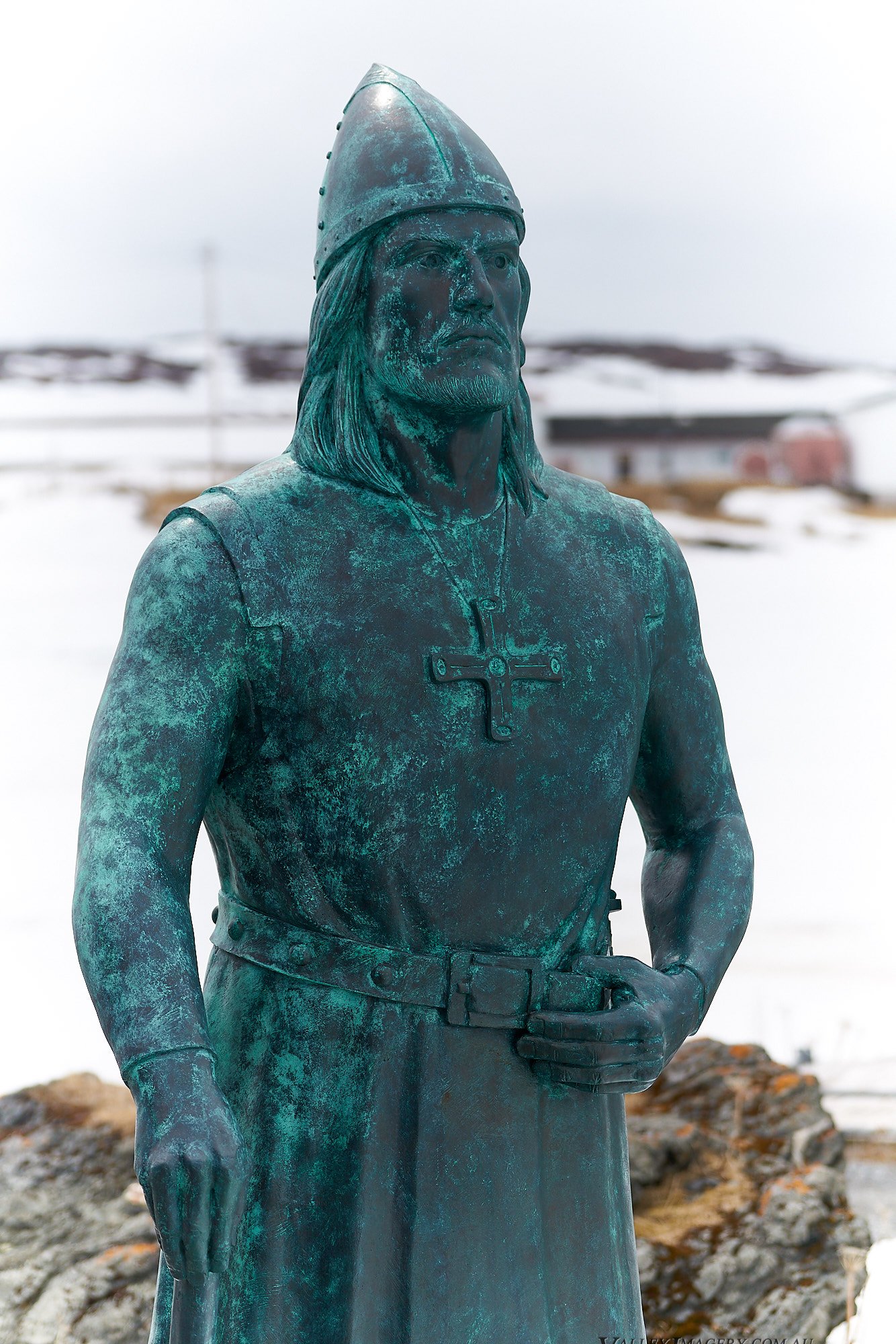 This was an ambitious plan, the weather in the Rocky Harbour area was set to close in during the day. We were not going to be able to enjoy ourselves in the area around Gross Morne. This led us to embark on a drive to the northernmost tip of the island in the small hope that we could see the township of St Anthony and the Viking settlement in the area.

We left around dawn and drove the first 30 min in the early morning light. We spotted a few Moose near the sides of the road early on, and this kept us all alert.

As predicted, there was a light mist and heavy fog. This was obscuring the mountains that we suspected were hiding just out of sight. As we progressed the weather slowly improved, it was still bitterly cold, only with less rain and fog. As we continued along, we kept our eyes on the water and spotted a few large Icebergs and lots of pack ice along the coast. Eventually, the weather was clear enough to see across the channel to Labrador. This narrow gap freezes solid in the heart of winter. This frozen water provides for a natural pathway for polar bears to cross over from the Canadian mainland.

After 4 hours in the car we arrived at St Anthony, the weather was again being restrictive, low fog and light rain were hugging the coast on this side of the island. We has a quick drive around town, grabbed lunch and then drove 15 min to Goose Cove. This was in the expectation of spotting another iceberg but it had drifted off since the previous reports we had. The snow was thick here, in some places it was up to 4 ft high, the roads were clear, but it was apparent that this area had received significant falls recently.

We then headed out of the area and further north to the L'Anse aux Meadows National Historic Site. This is where it became more apparent that we were in a completely different climate zone, snow was getting higher, lakes were completely frozen.

The terrain was less mountainous here and eventually, we could see the northern coast. The snow was covering most things here, but we found the Viking statue and saw some other small villages and more large icebergs way off in the distance. At this point, we were not optimistic about a visit to the Viking village. We could see where it was supposed to be......, and it was all white. The road into the interpretive centre started out ok, but we soon realized that we weren't going to get far. As we slowly travelled down the small road, the ice kept getting higher, 4,5,6 feet and taller. Im, sure there was about 10ft of snow on each side of the road on some parts of the road. We eventually reached the deserted carpark and optimistically we all got out and walked to the visitor centre. Someone had recently carved out the pedestrian access to the main building, we just couldn't see it. Each side of the path was a wall of ice 8ft tall! When we got to the building, The door was open. We gingerly entered the small foyer and realized that it certainly was not open to the public, snow covered every window. Clearly, there was no access to the village! After our 5 hour drive we, chalked this up to another "experience" and headed back south.

Along the way back home we stopped briefly at Flowers Cove to look at a set of ancient Thrombolites. These are an extremely rare and primitive micro organism which has left rock-like structures as evidence of their activity. Interestingly for us, another place to find these is on the opposite side of the world in Shark Bay, Western Australia. Clearly, the ones in Australia were warmer, it was still well below freezing here!

The remainder of the drive was a matter of chasing the light between the deteriorating weather. We were treated to some fantastic periods of stunning panoramic scenery. The mountains that were obscured on the journey north were briefly bathed in majestic sunset light. After an 11 hour day we arrived back at Rocky Harbour with persistent drizzling rain as the forebearer to the next day's activity. 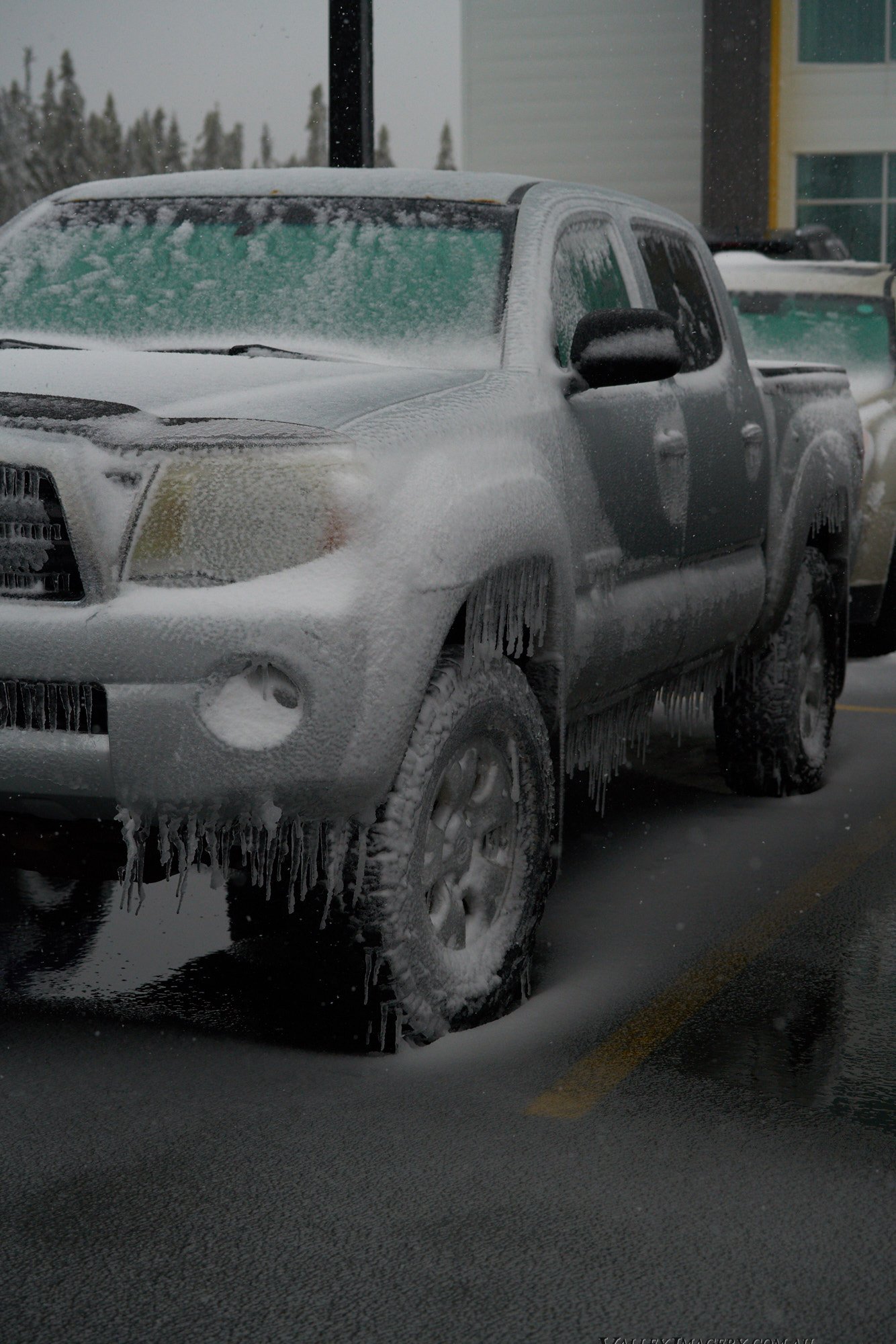 Day nine was our last full day on the island, it was also a full driving day as we headed back to St. John's. Its a long 10-hour drive from Rocky Harbor to St. John's. While this in itself wasn't a real problem, the weather reports were indicating a significant weather event. Due to this we left early and were on the road at dawn. The first 4 hours were unremarkable, but after this the Newfoundland weather really put on a show. A significant cold front passed through with snow, sleet hail and freezing rain, the wind was high and in a few places we were not even sure if the road would remain open. After a few white knuckle moments and the worst conditions I have ever seen, we arrived safely in St. John's and checked into a hotel near the airport. The next day we woke at 1.00 am, headed to the airport and said goodbye to Newfoundland.

Our biggest regret, is not staying one or two days more, we underestimated the driving distances and this meant shorter times at each location. The iceberg season was also not at its peak, another month into the year would have let us see more of the bigger bergs. Although the weather was not great, we were well prepared for the cold and brought appropriate clothing to make getting outside comfortable even at -10 degrees.

Not surprisingly, the island has left a lasting impression on us. Despite visiting at least a month earlier than was recommended, the experience was much more an adventure than a holiday. While the weather restricted the opportunity to visit some area's, it also made the entire visit worthwhile. To see pack ice, icebergs and snow drifts higher than our car, as well as the beauty of a snow-covered landscape made the stay unique.